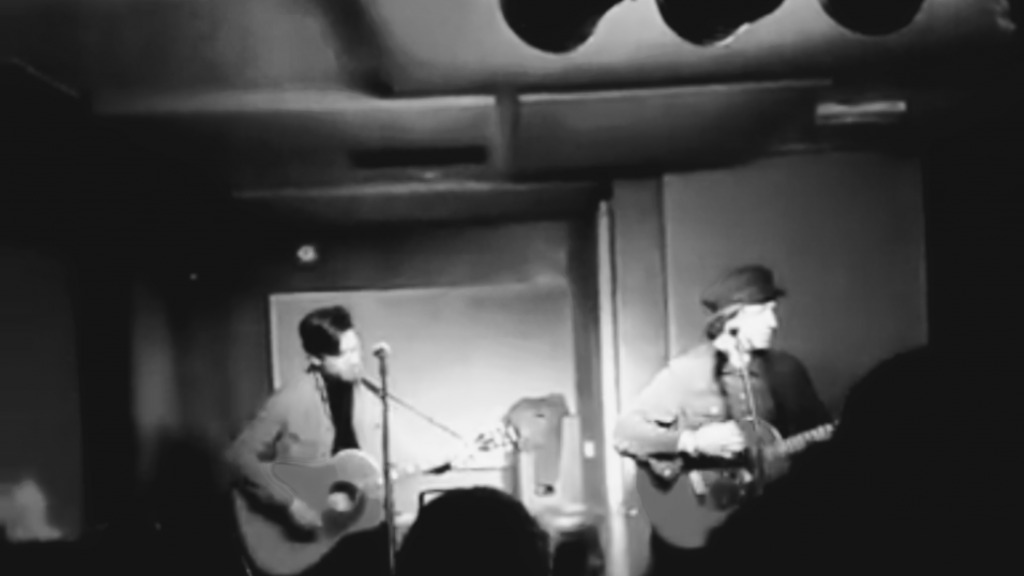 One of the greatest things about Northampton is stumbling upon hidden delights, tucked away in the most unexpected places. And perhaps, the brightest undiscovered gem is The Playhouse theatre. It’s amateur dramatic, almost Victorian vaudeville feel is the perfect frame for the evenings, intimate and acoustic performance. Singer/songwriter, guitarist and all round good egg, Andy Crofts, is best known for his work with Paul Weller and local band The Moons. That group have just recorded their fourth album at the legendary Abbey Road studios and tonight’s set, the second of two at The Playhouse, previews tracks from the promised album, alongside fan favourites and a few choice covers. Armed only with an acoustic guitar, Andy opens with a lively ‘Revolutionary Lovers’, before we return to The Moons’ genesis with ‘Chinese Whispers’ (from their debut album Life on Earth). It’s a rather conversational performance as Andy intersperses the songs with confessional tales that give a little insight on the origin of the tunes. New track, ‘The Old Brigade’ bodes well for the forthcoming record and it’s indicative of Andy’s lyrical bent which explores the minutiae of modern life, (The Old Brigade sold military paraphernalia in Kingsthorpe) and references to the towns localities pepper his work. The Beatles, ‘I’m a Loser’, is played in tribute to John Lennon and is paired with the quintessentially English, ‘Jennifer (Sits Alone)’, before Andy explores one of his favourite songs, the old standard, ‘Moon River’. He’s then joined by partner-in-rhyme and fellow Moons compatriot, Chris Watson, who adds acoustic guitar and vocal harmony on a whimsical ‘English Summer’. David Bowie’s, ‘Starman’, long a staple of Moons sets, is given the acoustic treatment and a delighted audience require little goading to sing-along. Likewise, when Andy picks up a miniature guitar and garnishes Brian Wilson’s ‘God Only Knows’ with Beatles flavourings, the assembled throng almost take the roof off and seems the perfect way to bring down the curtain on a special performance by a special artist.

What better thing to do two days after Christmas. Sarpa Salpa were back in Northampton and headlining The Roadmender, supported by Krankhead, Baby Lung, and Elijah Miller. Krankhead kicked things off with their energetic and crowd-engaging garage sound. A bit different from the other bands on the bill that evening, but a good demonstration of Northampton’s varied musical heritage. Baby Lung’s set was a joy to the ears – as always and that’s not said lightly, and are a band you should definitely check out. They are a mix of indie and jazz. Think Arctic Monkey’s album Tranquility Base Hotel & Casino meets Pink Floyd’s The Dark Side of the Moon, or Viola Beach, cut with the gritty vocals of Paulo Nutini. An interesting mix of artists there that needs to be seen to be believed. Baby Lung create a sound that is smooth, and easy to listen to, blending slow, building guitar pieces, David Gilmour inspired solos and saxophone solos, that add a unique and distinctive layer. Elijah Miller finished the support acts with a down to earth, upbeat indie sound discussing life’s follies from love to breakups.

The main act, Salpa put on an epic show, in celebration of upcoming EP, ‘Say Something’, released on 3rd of January, and naturally in a packed out mainroom, in the biggest venue of your hometown was  the prime opportunity to showcase this, playing  a number of tracks, including said single. It was a show you’d be hard pressed not to enjoy and that was attributed to the atmosphere alone, but the showcase of musical prowess was on-point and at times, mesmerising. The band, now a 5-piece consisting of Marcus Marooth (vocals), Charlie Doe (drums), Ethan Whitby (bass), George Neath (guitar) and Meg Amirghiasvand (on synth and anything else she can fit in her hands at the same time). Meg only joined in recent months, and has added more space, creating new opportunities in the music for the band to play with, liberating frontman Marcus to explore the stage. The band proved their experience with 120 shows, including a number of festivals such as The Big Feastival in Oxfordshire under their belt. I actually bumped into Charlie Doe’s father at the gig, and he was extremely proud of his son, and a good laugh too. For fans of bands such as Blossoms and Everything Everything, then I would recommend this band. But catch them quick, with the likes of the BBC and Radio X taking notice, they won’t be around the suburbs for long. Sarpa Salpa is currently touring England, and you can see them in Oxford, Camden, Brighton, Blackpool, amongst others.

December 28th 2019 marked the monumental return of Slowthai to Northampton’s premier music venue, the Roadmender. The rapper pulled no punches when bringing his end of year party back to his old stomping grounds. Off the back of his Mercury Prize nominated debut album, “Nothing Great About Britain”, a number of TV and festival appearances, such as, Jools Holland and Glastonbury, as well as, sold out shows at the likes of London’s Brixton Academy, the hype for this show could be felt across the town upon its announcement. Tickets for the gig sold out almost immediately. Slowthai’s last performance in Northampton saw him packing out the Garibaldi on the launch day of his debut album, with a guest appearance from grime legend Skepta. It was evident that he was going to up the ante for this end of year party. Support came from the likes of Mike Skinner of The Streets fame, ASH, Max Frith, Kelvin Krash & Kasien and P-rallel, who all appropriately warmed up the crowd with a mixture of UK garage, drum’n’bass and grime.

Slowthai himself came onstage concealed in a hoody and shades to an explosively warm reaction from the adoring crowd, before announcing that he was going to play some bangers before playing his own songs. This unusual start to the gig asserted that this was his party and his celebration, and he was going to do it exactly the way he wanted. He and his DJ played many crowd pleasers such as Toxic by Britney Spears and Smells Like Teen Spirit by Nirvana, as well as many club, house and grime classics. Slowthai kicked off his own set with his Mura Masa collaboration ‘Deal Wiv It’, the perfect sentiment to open his musical return to the sold out Roadmender – “walking back through my old estate/I see my mates who ain’t my mates and they don’t wanna say ‘safe’/they say ‘you’ve changed’”. He then proceeded to play a multitude of tracks from his album, most notably ‘T N Biscuits’ and ‘Doorman’, the latter of which precipitated one of the biggest moshpits the town had seen in recent memory, reminding the audience of Slow’s prowess as not just a relevant grime lyricist, but also a remarkable punk-rap frontman. Throughout the gig there were bottles of champagne poured over the audience, crowdsurfing, stage invasions and quintessential Northampton banter between Slowthai and the crowd. Slowthai brought a grime gig to the Roadmender with a snarling British punk attitude that stoked the fires of Northampton’s already burgeoning and booming music scene.

Originally from the town, now relocated to London, Phantom Isle pulled off one of hell of a homecoming gig  unfolding at the Black Prince, in celebration of the launch of latest EP, ‘I’m Urs’. As Tragic were unfortunately unable to play, the night was opened by Baby Lung, a little later than planned. You cannot miss Baby Lung at the moment,  they are literally everywhere and it’s easy to see why. With their minimal sax-enriched, alt-jazz style and bittersweet chords, they have the audience entranced.

Phantom Isle took to the stage performing some well known favourites such as Nightmare and Focus, before unleashing the bands new material including Channel Me, and the more experimental, punk-style psychadelia, that came as an unexpected surprise. The outfits were equally as memorable as the performance itself. Ever the Dandy, Mr Marchant, was a clear advocate for free the nipple, clad in a sheer black shirt, proving that they are perhaps the only band that can get away with raiding a vintage dressing-up box and pulling it off as dapper – see demonstration below. The only exception being perhaps, The Big Dirty. Though that’s an entirely different dressing-up box! Releasing a net of balloons into the crowd, they finished with the Single, ‘I’m Urs’, and they certainly were, fading to soft focus with hazy synths and ethereal melodies. And out.